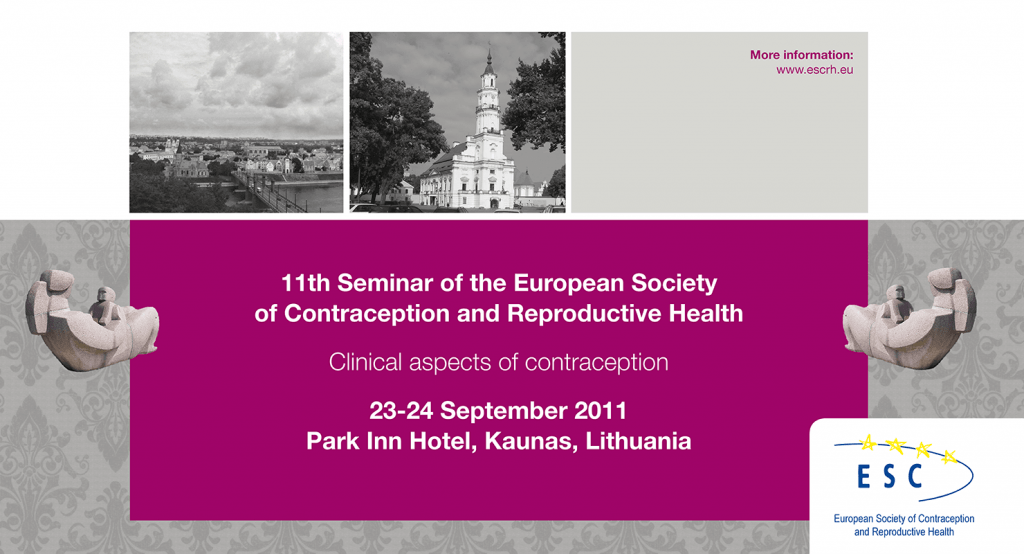 The 11th ESC Seminar “Clinical aspects of contraception” was held in Kaunaus, 23-24 September 2011.

Final programme and book of abstracts

Myth and truth about family planning and contraception among Lithuanian teenagers

Objective: To determine the level of knowledge of family planning and contraception among Lithuanian adolescents and to investigate how this knowledge is related to the adolescents‘ gender, sexual behaviour, place of living and school rank.

Design & methods: 896 Lithuanian students of either sex, entering grade 11 or 12 at an urban or provincial secondary school during the 2008-2009 school year participated in a confidential questionnaire survey. Schools-participators were selected from the Lithuanian Schools Rank List 2008. Every of 8 schools was of different rank position, 4 of them were secondary schools and 4 gymnasiums, 5 were urban (n=441) and 3 provincial (n=455) schools. The questionnaire consisted of 14 multiple choice questions to identify determinants of sexual activity prevalence, age at first sexual debut and family planning use and 12 propositions-myths to reveal students‘ knowledge.

Results: During COC intake non-significant increase of serum prolactin was registered in 22% of all women, without any differences depended on COC type. It was shown that in women of the 1st, 2nd and 6th group prolactin means were significantly lower after 3 months of COC intake in comparison with baseline, without any changes after the 6th and 12th months; in women of the 3d group prolactin level was decreased, but only after 6 months of COC intake; in the 4th group of women decrease of prolactin level was shown after 3 months of COC intake, and after 6 months the majority of women became normoprolactinemic. No any differences of prolactin means were shown in women of the 5th , 7th and 8th groups during COC intake, but it should be taken into account that number of women in the 7th and 8th groups was limited.

Conclusion: COC intake did not cause significant prolactin raise in women with non-tumor moderate hyperprolactinemia. Moreover, It was shown that prolactin levels even decreases after 3 month of COC intake in groups of hyperprolactinemic women used COC contained 20 mcg of EE+150 mcg of desogestrel / 75 mcg of gestoden or 30 мcg of EE+75 mcg of gestoden /3 mg of drosperinone, and after 6 month – in case of intake 30 mcg of EE+150 mcg of desogestrel contaned COCs